Andrew Pyper, the ITW Award–winning author of six bestselling novels, has read a lot of horror stories. Here he writes about one novel that truly got under his skin.

The other night, drinking in my backyard with some other writers, some of whom write thrillers and horror as I do, the question came up as to when was the last time we read something that really and truly terrified us. Not a piece of writing we admired for the way it constructed its scares, not something we found unsettling or offputting or creepy, but the real gut-level deal. Bona fide horror in book form.

It took me a while to come up with my answer. Partly because there are so many horror novels I’ve read over the years that I have admired and found unsettling or creepy, but not to the point of slapping the covers closed with a scream. Partly because I think I’ve always read thrillers for the ideas or mythologies they can uniquely explore, as much as the thrills themselves.

While we all cited different titles in the end, what my writer friends and I had in common was that the last books that truly scared the bejesus out of us were ones we read as young people. Why? We worked up some theories. They all seemed to boil down to immersion. Back then, we could dive all the way into the worlds we read. There was no EXIT sign at the end of the dark hallway, no call of “Time out!” that had the power to return our disbelief from wherever it had been suspended. These were books that possessed us. Ones we believed in. 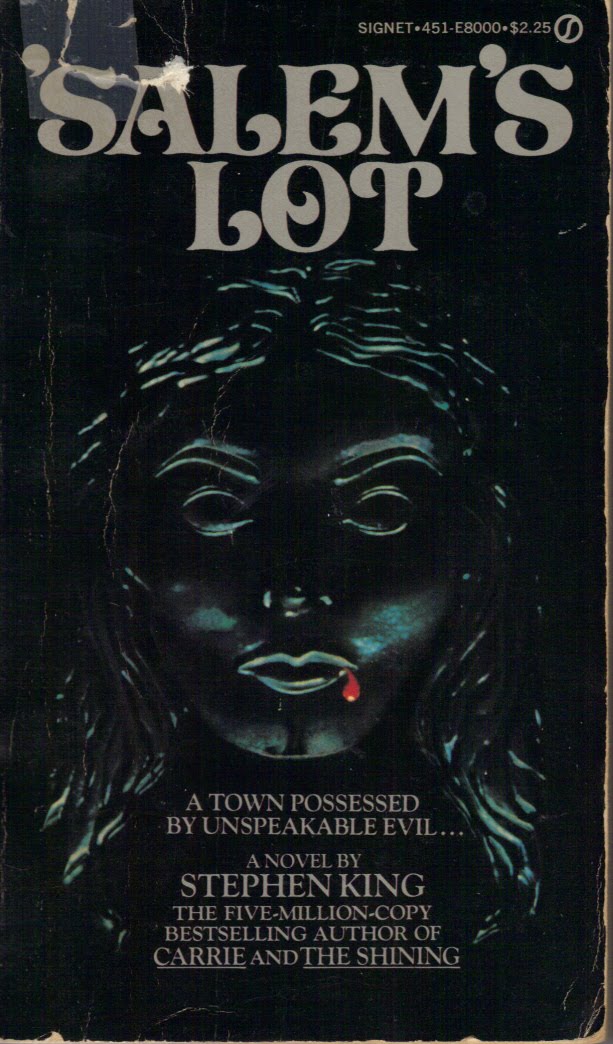 For me, that book was Stephen King’s Salem’s Lot. Which is kind of funny, as I’m not much of a vampire guy when it comes to favorite horror sub-genres. I like pondering whether I’d drink the blood of innocents in exchange for immortality as much as the next goth, but to me vampire stories too often present their monsters as pompous dandies, suave seducers, poor man’s Hamlets. Vampires invite the campy in ways many writers have found irresistible.

But when the 12-year-old me read King’s story of a small town besieged by the ravenous undead, I was all in. It was his particular version of vampires that did it: savage and single-minded, relentless and recognizable. But it was also, I think, the way the town of the novel reminded me of my own small town where I grew up. The monsters of the fiction lined up with my own neighbors, the tree-shaded streets were my streets, my imagination seeing the darkest possibilities in the everyday just as the world of the book did. It wasn’t just a good vampire story. It was personal.

Reading ‘Salem’s Lot was the last time I could check off each of the points in the unholy trinity of horror reading: I was young, the fictional setting and circumstances directly matched up with my own, and the monsters were presented not as fantastical, but possible.

The thing is, while I treasure the experience of reading that book, I’m not sure I’d like to return to it. What I mean is that I’d be happy to read it again today, but not transported to my reading of it then. It’s simply too dangerous. Who knows how close I came to being lost in it for good? How real could I have made it? What would have happened if a vampire had come scratching at my window and instead of pulling the covers over my head I got up and let it in?

Andrew Pyper is the author of six bestselling novels, most recently The Demonologist, which won the International Thriller Writers Award for Best Hardcover Novel.  His new book, The Damned, is to be published in February 2015.